The store will not work correctly in the case when cookies are disabled.
Cash On Delivery is available Nationwide 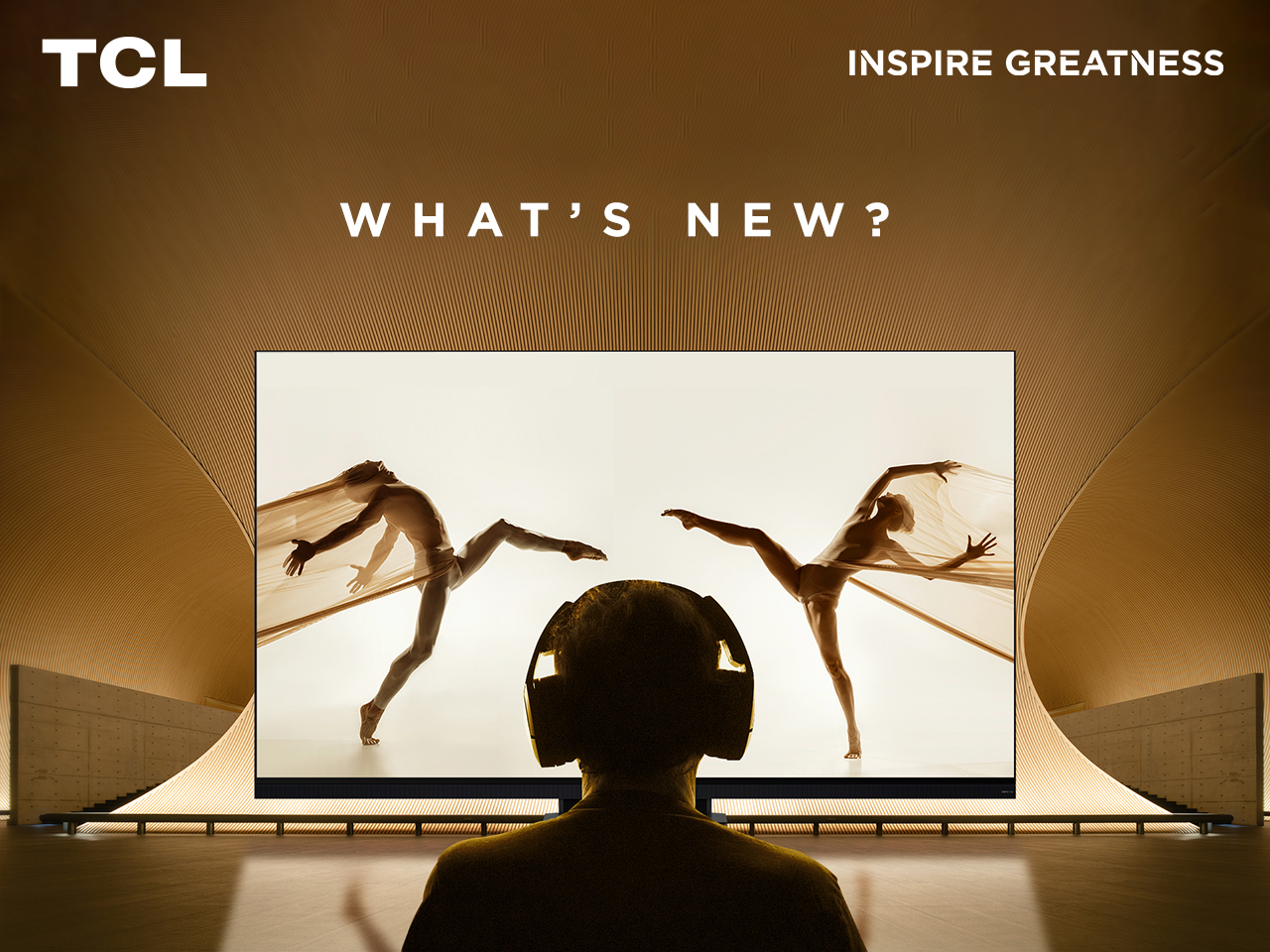 TCL has a history of making budget-friendly televisions, but in 2022, it's stepping up its game. The company has announced that all of its TVs will be equipped with Google TV starting this year, which means you'll be able to access streaming apps like Netflix and Hulu right on your TV. That's not the only big change coming in 2022: TCL is also upgrading its tech and adding 144Hz refresh rates across most of its lineups. Here's what you need to know about TCL's new TV and how it could impact your next big purchase!

The best sound quality comes from the TV's built-in speakers, which offer really good performance for a flat panel TV. TCL has a dedicated 2.1.2ch system, which is comprised of two speakers and a subwoofer to provide surround sound audio for your entertainment experience. It includes two front-firing 10W speakers and one 15W subwoofer (also front-facing), all driven by Dolby Audio processing for enhanced bass effects when watching movies or games on Netflix or Hulu. This setup is also compatible with Dolby Surround Sound technology in case you want to add some extra channels around your room through separate speakers connected via HDMI cable (available separately).

The Onkyo provides a powerful 7 x 70 watts (3 ohms) of power amplification through its seven channels, which are all compatible with Dolby Atmos and DTS:X technologies to bring you immersive 3D sound in your home theater setup. It also supports the latest High Dynamic Range (HDR) formats like HDR10+.

The biggest change for the 2022 TCL TV lineup is the inclusion of 144Hz VRR: With this non-interlaced display, you can enjoy a fast refresh rate of up to 144Hz, which means smoother transitions between images. It also refreshes at high speeds so that it doesn't have to constantly draw new frames on the screen when you are doing things like playing video games or watching sports. This means less lag time between your input and what's happening on the screen.

Also, TCL joins the fast-growing 144Hz club with its new models. This is a big deal and a significant improvement over 60Hz, which was standard across most TVs until very recently. If you're not already familiar with the refresh rate, it's basically how many times per second your TV can update its picture. The higher this number is, the smoother your picture will look when watching fast-moving objects like sports or action movies (whereas lower refresh rates can cause motion blur). It's especially important if you want to be able to enjoy those kinds of videos on your 4K/8K models; soon enough, they'll likely be even more popular than they are now!

Dolby Atmos and Quantum Dot are a given with the 2022 TCL TV. MEMC motion clarity is also included to make your picture look smoother by reducing motion blur during fast-paced scenes.

The AI technology that powers the processor now also has an "AiPQ Engine" that will automatically optimize your picture depending on what you're watching. For example, if you're watching a sports broadcast or playing a video game, it will adjust itself so that the action is crisp and clear.

IMAX Enhanced enhances the quality of any content on screen by optimizing pixels for a larger display than what's actually being shown on screen—making everything look sharper than before!

If you're looking to connect your TV to a 4K HDR-capable device, TCL 2022 TVs have you covered. The HDMI2.1 port supports 4K HDR at 60Hz, with support for up to 10-bit color depth and a wide color gamut. The HDMI2.1 connection also supports a feature called dynamic HDR, which is a bit different from HDR10 (the standard used by most modern TVs).

Dynamic HDR means that when you're watching movies or TV shows with soundtracks that weren't mastered in Dolby Vision—which is most of them—you'll still get an enhanced picture without having to use an external box or apps like Dolby Atmos or Vizio CraveTV+.

In 2022, TCL integrated its TVs with WIFI6, which is the latest standard of Wi-Fi connectivity, with speeds up to 100 Gbps. TCL is the first TV brand to offer WiFi6 on their TVs, and it's exciting because you can use this incredible technology on your TV!

This means that your TV will be able to connect to the internet at incredible speeds—we're talking about wirelessly downloading content or streaming movies at lightning speed!

If you've ever been frustrated by slow internet while streaming videos on Netflix or Amazon Prime Video, then WIFI6 will totally change how you watch TV.

TCL is adding Google TV functionality to their whole line of new TVs, and this is a huge deal. This means you can use your voice to do things on the screen, like Netflix or Hulu. Also, you'll be able to play games that support voice commands. The other big new feature is MultiView 2.0, which allows you to watch two different TV shows or movies simultaneously—or watch one while playing a game on another part of the screen!

The AirPlay2/HomeKit functionality lets you use Apple's AirPlay2 wireless streaming protocol right through your TCL Smart TV! You can even control these devices using Siri when hooked up with an Apple TV box. The Miracast for PC capability basically lets you stream any content from a computer onto the big screen without ever needing an HDMI cable again - perfect if someone wants to show off photos they've taken while traveling abroad without needing any other equipment besides their own laptop (or desktop). Finally, there's AR Fitness, which uses augmented reality technology in order to track how many calories have been burned after exercising consistently over time!

First up, there's the new Game Master Mode, which aims to let you create your own personal theater experience. You can adjust the color temperature and tint, choose between a bunch of preset modes optimized for specific types of content (such as video games or movies), and even tweak individual settings like contrast and brightness on each input independently. It sure does give you a lot of granular control over how your picture looks in different situations.

The new Cinema Mode is a lot more interesting. It's meant for watching movies, and it automatically adjusts the brightness based on the content you're watching. This means you can have a bright TV in bright rooms, but when you're watching something like Star Wars or The Rise of Skywalker in your dark home theater, the TV will adjust to being less luminous so as not to wash out all that glorious blackness.

The lineup of TCL TV sets has been made up of five series: P, C, and X.

The TCL P series is a 4K HDR TV that has a 60Hz refresh rate and works with Alexa Voice. It also offers Dolby Vision support, which means you can watch content with wonderful picture quality on this TV. This model comes in six different sizes: 85/75/65/55/50/43.

The C series is equipped with a better screen and will be available in sizes ranging from 43 inches to 98 inches, with the following models:

We've covered a lot of ground when it comes to the new TCL TVs for 2022. The company is growing in a big way, with its first Google TV-powered smart TVs and many other exciting features. If you want a closer look at those beautiful sets, you can go to the TCL local store and check them out!

TCL Teams Up with PCB as Associate Partner of Pakistan vs Australia Series March 3, 2022
Latest

Gamers, Be Ready! As TCL Brings the Biggest eSports Football Gaming Competition with a massive prize of over PKR. 1.5 million November 8, 2022

TCL reinforces its green commitments with the launch of #TCLGreen October 28, 2022